Lake Anna, an artificial lake, was built as part of the river in North Anna in order to act as a water coolant reservoir for the Lake Anna Power Plant. In appearance and design, the North Anna power plant is similar to that of the Surry Power Station, also located in Virginia. 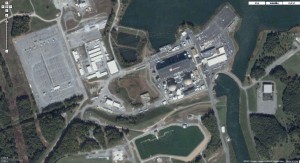 The North Anna power plant has been the subject of controversy at times. Around 2008, there were plans to add a third reactor to the site, which the public wasn’t happy with. In August of 2008, the public protest continued when six activists were arrested for trespassing. The activists, who were from the Peoples Alliance for Clean Energy, were arrested at the power plant’s Information Center. In October of 2010, the president of Dominion, Tom Farrell, announced that the power plant would be slowing the process of developing and adding the reactor.

Seismic risk is a common concern when it comes to power plants. According to the Nuclear Regulatory Commission, there’s an annual risk of 1 in over 22,000 that there will be an earthquake that’s intense enough to cause the reactor core damage. However, there are two seismic zones in Virginia, one in Giles County and the other in Central VA. Every few years, these two zones have small, recurrent earthquakes. Located 40 miles to the northwest of Richmond is the North Anna power plant, which is in the Central VA Seismic Zone.

There are also known fault lines at the power plant. When the original reactors were being constructed, fault lines were found. Stone and Webster, an engineering firm, learned about the existence of the fault lines after being hired by the power plant. There was a $32,000 fine by the government for keeping this information private.

Posted in: About the areaTagged: power